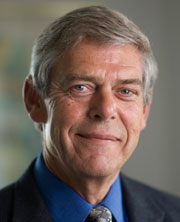 Dr. Mescher received a B.A. in Chemistry from Hope College and a Ph.D. in Biochemistry and Molecular Biology from Harvard University under Jack L Strominger.  He became an Instructor, Assistant Professor and Associate Professor in the Department of Pathology at Harvard Medical School. He then moved to the Medical Biology Institute in La Jolla, CA to head the Division of Membrane Biology.  In 1993, he came to the Department of Laboratory Medicine and Pathology at the University of Minnesota Medical School and took the Virginia and David C. Utz Land Grant Chair in Immunobiology.  In 1995, he became the first Director of the newly formed Center for Immunology. In 2008 he was elected to the Academic Health Center's Academy for Excellence in Health Research for his groundbreaking research on cytotoxic T cells. In 2016 Dr. Mescher retired from the University of Minnesota.

Dr. Mescher is professor and holder of the Virginia and David C. Utz Land Grant Chair in Immunobiology. He was the founding director of the Center of Immunology. His research centers on T-lymphocytes, how they are activated as a critical part of the adaptive immune system, how they interact with other cells, and the signaling mechanisms they use. Different T-cell receptors interact with their ligands on the antigen-bearing cell and with cytokines to activate T-cells, causing them to differentiate and expand. CD8 T cells or “killer cells” proliferate in response to antigen and co-stimulation through a receptor called CD28 but they don’t survive. These T-cells require a third activating factor for a sustained response, which Mescher and subsequently other immunologists have identified as either interleukin 12 (IL-12) or type 1 interferon (1 IFN). More recently, Mescher found a third cytokine, interleukin 21 (IL-21), that like IL-12 and 1 IFN activates T-cell differentiation and expansion. To better understand the role of these activating factors in T-cell response, Mescher’s research team has conducted microarrray gene-expression analysis to see what genes these cytokines up-regulate and down-regulate.

Controlling CD8 T-cell activation is key both to preventing and fighting disease, depending on the disease. In type-1 diabetes, for example, CD8 T cells kill the pancreatic islet cells that sense blood sugar levels and release insulin to maintain normal levels. In cancer, CD8 T cells kill tumor cells but not in sufficient numbers to constitute an effective defense. One clinical approach growing in use is adoptive immunotherapy. Antigen-specific CD 8 T cells that can recognize antigen on a tumor are isolated from the patient, activated ex vivo, and returned to the patient. Mescher’s group has shown that IL-21 as well as IL-12 and 1 IFN can be used to activate the cells in vitro.

Cytotoxic T-cells are less effective at fighting tumor cells than they might otherwise be because they carry protein receptors that down-regulate their activity following antigen recognition. These inhibitory molecules are thought to protect against the risk of an autoimmune reaction as occurs in type-1 diabetes. Immunologists have identified several of these molecules including the CTLA-4 inhibitory receptor and the programmed death 1 (PD-1) inhibitory receptor. Antibody blockade of these inhibitory receptors, which figuratively removes the “brakes” from cytotoxic T-cells, has significant potential for treating a variety of cancers. Mescher and his colleagues are exploring how cytotoxic T-cell-activating cytokines differentially affect PD-1 expression levels in response to tumor antigen. In research with therapeutic implications, they have found that CD8 T-cells stimulated with IL-12 are much more effective than those stimulated with an interferon signal because the interferon stimulated cells express higher levels of inhibitory PD-1.